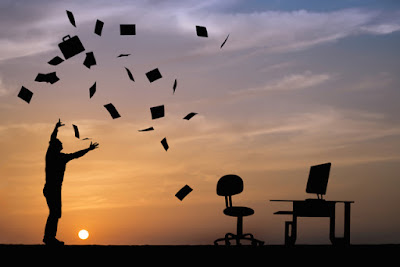 When I began this series in January, it was to mark my resolution to dream bigger this year. So naturally the time has come to ask myself how successful I've been. Has everything gone according to plan?

Not exactly. For example, I was really hoping that I'd be running a regular improv night in Nottingham by now. And though we've had several ideas that have reached various stages of readiness, it just hasn't happened. I was also planning to write loads of short stories this year, after a great writers' retreat at the start of January. In reality, that ended up being the only time I got any short story writing done.

But does that mean I've failed? Well, rhetorical question, this is the beauty of abstract resolutions. They allow you to control the narrative.

It makes sense to think about your life as a story. Events happen in a certain order for everyone (birth, infancy, school, university, etc.), so there's a well-defined structure. But what makes your story unique is that you're the main character.

The trouble with thinking like this - perhaps especially for a writer, but maybe not - is that I often expect my life events to make sense, as if everything was planned out beforehand. If something doesn't work out, I'm left trying to work out how this failure fits into my narrative. 'Maybe I was always meant to have that unhealthy relationship,' I might say. 'It paved the way for something that happened a few chapters later.'

I'm not sure why I do this, but I know that there's a time and place for it. Sometimes we need to admit when something went wrong, and dig into why that happened. But other times it's healthy, especially when the narrative you're trying to create isn't your actual life.

So I haven't set up a regular improv night this year. But thinking about the events that I have run in the last 12 months, maybe it wouldn't have been the right thing to do this year anyway.

And I haven't written any more short stories yet this year. But I did submit one for a competition. And though I was unsuccessful, my rejection has helped me identify some issues in my writing that I can fix ready for next time.

In short, dreaming bigger has succeeded this year. I might not have achieved exactly what I wanted to achieve, but reflecting on 2019 has helped me realise two things...

1) I have done some pretty cool stuff this year. I wrote and performed my first ever one-man show. I co-wrote and performed in a live sketch show. I'm engaged to my best friend in the world, I've spent lots of time with wonderful friends, and I've really gotten back into reading for pleasure. I haven't spent as much time on creative endeavours as I could have done, but I couldn't call any of it time wasted.

2) Dreaming bigger isn't a one-year project. My resolution this year has helped me commit to my creative dreams, and work out ways of making them a reality. This series might be over, but the act of dreaming bigger has only just begun. I've got big plans for next year, and I've already started setting them in motion.

Thank you so much for following this series, I hope you've found it as useful as I have. If you don't want to miss another blog post, they're not going away. You can subscribe to the mailing list on this page. Thanks, and here's to another year of dreaming bigger.
Posted by Sam Marshall at 05:52