The Thursday Murder Club: An Antidote to Crime Fiction 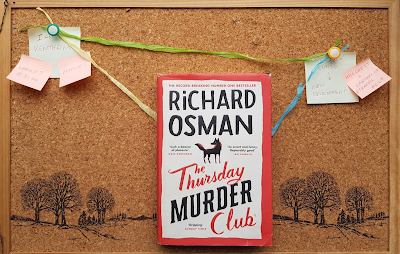 It's always amazed me that there are people who read nothing but crime fiction. Though I make a point of reading books from many genres, crime is one section I never really visit on my almost weekly trips to Waterstones.

I can see the appeal, of course. You know what you're getting with a crime novel, especially if you're committed to a single author or one of their series. Detective is having some personal trouble which they have to put out of their mind while they solve a murder or missing persons case. Personal trouble keeps haunting the detective, but in a useful way that somehow helps them solve the case and make an emotional breakthrough at the same time.

But to me, this formulaic approach brings little comfort, especially in book form. I've been known to enjoy the odd police procedural, but it's the ingenious solutions of David Renwick's Jonathan Creek and the psychological focus of CBS' Criminal Minds that have appealed to me - quirks that counterbalance what can often be quite unimaginative writing. When it comes to books, I want a challenge; something that makes me think, or laugh, or cry.

Every so often, I try to circumvent my prejudice against the genre. But while a few books have slipped through the cracks, they've never been the complete package. In Charlaine Harris' Lily Bard Mysteries, the the charming cast of small town residents is more compelling than the mysteries themselves. Conversely, the non-crime-related events of Ian Rankin's Rebus novels feel more like filler than insight into the characters.

So it's unlikely that I would have bought The Thursday Murder Club for myself - even as a fan of author Richard Osman's many TV and radio exploits. But thanks to a delayed delivery, I received it last year as an interim Christmas present. And with all the fantasy and sci-fi on my TBR this year, I thought "why not break it up with some crime?"

I'm very glad I did - it's the crime novel that has challenged all my misgivings about crime novels.

No matter how hard you try to defy them, it's hard to avoid the filing cabinet full of well-worn clichés and stock moments inherent to the crime genre. The Thursday Murder Club is no exception, but I've never read a book that subverts them in quite such a novel way.
We've all read the scene where the lead detective, having exhausted all official leads, begrudgingly consults a local organised crime boss as a last resort. Well, what if that informant was really likeable? Someone you'd visit for a drink or a slice of home-baked cake? Well, that's the Thursday Murder Club.
Four golden oldies living in a retirement village sit at the centre of this murder investigation. Each one has a unique charm and a rich inner life with which we don't often credit people of their age. Even the hackneyed good-cop-bad-cop routine, manages to find new life when attempted by semi-famous unionist Ron and retired psychiatrist Ibrahim; and readers may snicker with delight any time Elizabeth makes use of the global contacts from her apparently classified past.
Making these four pensioners the protagonists of the story is a stroke of genius from Osman. Police investigators Chris and Donna are almost as likeable, but part of me wonders if Osman has deliberately made them a little bland; subtle pastiches of professional detectives who, in any other crime novel, would be the main characters.

A particularly tiresome trope of the crime genre - perhaps more closely associated with American writing - is the dry, sarcastic humour that detectives apparently need to display in order to pass their final exams. Well-deployed, it does lend a certain gravity to a character, but like many crime tropes, the depths seem all but plumbed now.

It was very refreshing to find little of this quippy, self-congratulatory comedy in The Thursday Murder Club. The humour - of which the book is full - has a much more genuine edge to it. And - from Joyce's misadventures with technology to Elizabeth's motherly concern for PC Donna's personal life - it's firmly rooted in the characters.

But it's not just where our own observations of older people are confirmed that humour is found. It also appears on the many occasions where they surprise us. We're heading into spoiler territory so I won't give too much away, but don't be surprised if you end up believing that these four septuagenarians could do almost anything if they set their minds to it.

Finally, it is where most crime novels disappoint me most that The Thursday Murder Club really impresses. From Kinsey Milhone to Sam Vimes, every hard-boiled detective is battling with inner trauma, but it usually plays second fiddle to the crime plot. Either it's an unnecessary distraction to be filed away until it's plot-relevant; or it represents some character growth the protagonist needs to face.
This novel, though, is concerned with the realities of later life, and so the relationships and emotional stress can't help but take centre stage. Elizabeth's dementia-suffering husband Stephen, Joyce's attempts to coax Bernard Cottle out of his shell, and Ron's fluctuating relationship with his son; none of these are lessons they need to learn or annoyances they wish to avoid. They are insights into the lives of humans who - in spite of all presumptions - still have so much left to give.
Such well-realised elderly protagonists bring with them the wisdom of age. Their characters are fully developed, and what insecurity remains is channelled toward others. Their emotional intelligence is what helps the Murder Club to get ahead of the police investigation at crucial moments, and also what brings real heart to the story's more tender moments.
In short, I highly recommend this book - to lovers and haters of crime fiction. Though it opens with the gentle ease of the man sitting behind the desk on Pointless, it's a truly moving story with laughs in its belly and love at its heart. And in September, after many years of failing to do so, it looks like I'll finally be buying the sequel to a crime novel.
Posted by Sam Marshall at 14:48 No comments: