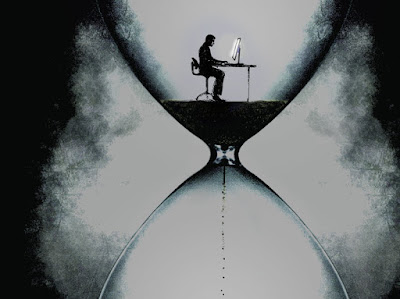 For me, dreaming bigger starts with clearing my own path. With a full time job and an active social life, it often seems like there's no time for being creative and working on my own projects. But deep down, I know that it's me not taking the initiative and devoting time to them. So today, it's time to put on the gardening gloves and weed out the traps and time sinks that are easy to fall into, but hard to escape.

As someone who spends a lot of time doing research online, I'm very prone to the internet rabbit hole. Whether it's the quicksand of a Buzzfeed list article or the bear trap of a pointless personality quiz, I want to avoid negative, empty interruptions.

Distractions can be good. In fact, I often get my best writing done when I allow myself to be distracted. I'll find out a nugget of information to weave into a story, or rest my brain for long enough to think of that rhyme I've been searching for. But Chrome and her cookies are on my tail with personalised clickbait, ready to pull me into a world of banal sports gossip and pictures of well-dressed micropigs.

Worst of all for me is what I call the 'clever clickbait.' The stuff that gets me even when I think I'm on high alert. A good example is this one from Zergnet: "Workers reveal what it's really like to work at a buffet." The part of me that makes me click is expecting a riveting account of the buffet industry from the people who felt trapped by their hospitality job - clearly I've been spoiled by podcasts.

The rest of me knows what's coming: endless ad-filled pages of mildly amusing, mostly disgusting stories grabbed off Reddit about what customers do when they want to pay as little as possible to eat as much as they can.

I'm not saying it's an intrinsically bad thing, but it's literally designed to make you spend as long as possible looking at adverts. And that's time I could be spending being creative. So I'm trying to be more discerning, and make sure advertisers can't just scoff at my attention buffet for free.

The other big time sink I'm trying to change my perspective on is video games. Again, not necessarily a bad thing. They're great for when I've had a very busy day or week, and I need to relax while also engaging my brain. They sit nicely in between just watching TV and actually being creative.

But there came a point where I would be looking for any spare moment when I could squeeze in some video game time. And that's not helpful when it comes to dreaming bigger. If I have a spare half an hour, I want to work on that sketch idea, or call that pub to find out if we can use their upstairs room. With a full-time job taking up my time, I should be taking advantage of those moments, not just letting them pass.

Do you still fall for clever clickbait? Could you be making better use of your fleeting moments? If you want to dream bigger with me, think about what your traps and time sinks are and how you can shake them off.
Posted by Sam Marshall at 05:53 No comments:

Intro: How Alt-J announced themselves

When Alt-J burst onto the alternative scene in 2012, I completely missed the boat. I actually avoided listening to them because I had them confused with X-Factor dropout boyband Union J. Their names are similar and they both reached their breakthrough in 2012, but it was a silly mistake nonetheless.

Seven years later, Alt-J's Mercury Prize-winning debut album An Awesome Wave is a true favourite of mine. Its quirky a-cappella interludes, literary lyrics and use of world music have tempted many critics to dismiss them as pretentious and aloof. But as a listening experience it's second to none. To borrow from John O'Brien's AllMusic review, its "eclectic arrays of sound are woven together so effortlessly that the results never feel forced."

And as for the whole 'pretentious' thing... well that's what this post is all about.

Alt-J made their breakthrough with their third single 'Breezeblocks', released just a week before the album it appeared on. That song is where most people heard them for the first time, but that's not the introduction I want to talk about.

I want to look at 'Intro', the first song on their first album: a song that allows Alt-J to introduce themselves to listeners on their own terms. And, perhaps unsurprisingly, they do have something to say about themselves.

The song begins with an 80-second instrumental introduction. Haunting piano chords give way to a clean, catchy guitar loop, and eventually the two combine to bring in the first line of lyrics: 'Shit them all festival, laugh at the beautiful." We're 90 seconds in and they've already told us everything we need to know.

With the rise of streaming services, and apparent decline in attention spans, mainstream music often does away with introductions altogether. According to a study of top 10 songs, it now takes an average of 5 seconds before the singer comes in, compared to 20 seconds in the 1980s.

Compared to chart music, Alt-J's intro is lingering, patient, perhaps even self-indulgent. But it, along with the jarring choice of a curse word to open their album, achieves the desired effect. They want to distance themselves from a genre, from a scene they don't relate to.

It's clear elsewhere too, particularly in the second verse: "Stickle brick, tickle quick, laugh at the beautiful." The band see today's pop music as a series of blocks being stuck together like toy bricks into familiar formulas designed to amuse, to give short-term entertainment. 'Today's charts don't see music as an art form', they say. 'But we do.'

Alt J do reveal their pretentious side in this song - disdain drips through every word. They seem to see the music they produce as 'better' than the popular music of today, simply because they approach it as an art form, rather than a way to make money. And while this may draw criticism in the papers, there are a lot of music fans who feel the same way.

Many feel ignored by a music scene that favours heavy dance beats over well-considered lyrics and carefully crafted melodies and harmonies. So can you blame Alt-J for reassuring those groups that they're not like that?

I think it's their superior attitude that gets them the label 'pretentious', rather than 'experimental' or 'indie'. I am also not the biggest fan of chart music, and I'm happy as long as Alt-J keep producing songs as beautiful as 'Taro' or as deeply vulnerable as 'Dissolve Me'. This band clearly do treat every piece they write as a piece of art, and I'm just glad they're self-aware enough to tell us that.

Pretentious or not, 'Intro' is a powerful introduction to a frankly astounding album. I listen to it again and again, and I haven't gotten bored yet. So perhaps they're onto something.
Posted by Sam Marshall at 06:11 No comments: